One challenge in studying scripture is to avoid oversimplification, to see the variety of experiences of those seeking God and God’s varieties of grace extended to them. The Book of Mormon is no exception here. Through its chapters there are prophets, refugees, explorers, settlers, kings, judges, and more. Each sought to understand their life in terms of their relationship to God — some more successful than others. In addition to these, there are two other notable groups: warriors and pacifists. Understanding how God accepted these two very different groups can help us avoid oversimplifying scriptures as well as find more respect towards others who have differing views from us. 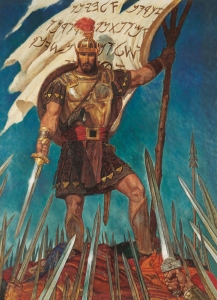 A major theme in the Book of Mormon is the conflicts which occurred between the estranged peoples of the Nephites and Lamanites (both descended from the same family). The Book of Mormon itself states it was compiled by Mormon, a general of Nephite armies, and so it’s understandable that this perspective carries through many chapters. A central figure in this group is Moroni, a chief commander of the Nephite armies (pictured above), and who Mormon named his son after. When the Nephite people faced a serious threat to their freedom, Moroni rallied their defenses:

And it came to pass that he rent his coat; and he took a piece thereof, and wrote upon it— In memory of our God, our religion, and freedom, and our peace, our wives, and our children—and he fastened it upon the end of a pole.

And he fastened on his head-plate, and his breastplate, and his shields, and girded on his armor about his loins; and he took the pole, which had on the end thereof his rent coat, (and he called it the title of liberty) and he bowed himself to the earth, and he prayed mightily unto his God for the blessings of liberty to rest upon his brethren…

And when Moroni had said these words, he went forth among the people, waving the rent part of his garment in the air, that all might see the writing which he had written upon the rent part, and crying with a loud voice, saying:

Behold, whosoever will maintain this title upon the land, let them come forth in the strength of the Lord, and enter into a covenant that they will maintain their rights, and their religion, that the Lord God may bless them.

And it came to pass that when Moroni had proclaimed these words, behold, the people came running together with their armor girded about their loins, rending their garments in token, or as a covenant, that they would not forsake the Lord their God

This “Title of Liberty” becomes a rallying device representing the Nephite people’s righteous desire to defend their own “religion, freedom, peace, and family”. And the Book of Mormon later highlights how when the Nephites operated beyond these bounds and instead sought offensive vengeance it lead to their eventual destruction:

And it was because the armies of the Nephites went up unto the Lamanites that they began to be smitten; for were it not for that, the Lamanites could have had no power over them.

So we have accounts of God accepting limited righteous force being used to preserve “religion, freedom, peace, and family” with a warning against stepping beyond those limits. But this is only one response to violent threats that God accepts in the Book of Mormon. 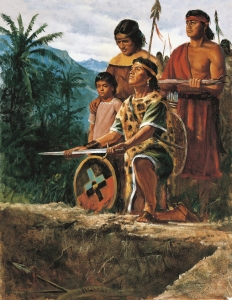 Earlier in the Book of Mormon, before the Title of Liberty, there is a counter example of the Ammonites (pictured above burying their weapons of war). They were converted Lamanites who had become horrified by their participation in shedding blood. They too sought to make a covenant with God:

Now there was not one soul among all the people who had been converted unto the Lord that would take up arms against their brethren; nay, they would not even make any preparations for war; yea, and also their king commanded them that they should not.

Now, these are the words which he said unto the people concerning the matter: …

… let us stain our swords no more with the blood of our brethren.

Behold, I say unto you, Nay, let us retain our swords that they be not stained with the blood of our brethren…

And now it came to pass that when the king had made an end of these sayings, and all the people were assembled together, they took their swords, and all the weapons which were used for the shedding of man’s blood, and they did bury them up deep in the earth.

And this they did, it being in their view a testimony to God, and also to men, that they never would use weapons again for the shedding of man’s blood; and this they did, vouching and covenanting with God, that rather than shed the blood of their brethren they would give up their own lives

Now when the people saw that they were coming against them they went out to meet them, and prostrated themselves before them to the earth, and began to call on the name of the Lord; and thus they were in this attitude when the Lamanites began to fall upon them, and began to slay them with the sword.

And thus without meeting any resistance, they did slay a thousand and five of them; and we know that they are blessed, for they have gone to dwell with their God.

Now when the Lamanites saw this they did forbear from slaying them; and there were many whose hearts had swollen in them for those of their brethren who had fallen under the sword, for they repented of the things which they had done.

And it came to pass that they threw down their weapons of war, and they would not take them again, for they were stung for the murders which they had committed; and they came down even as their brethren, relying upon the mercies of those whose arms were lifted to slay them.

…and those who had been slain were righteous people, therefore we have no reason to doubt but what they were saved.

And there was not a wicked man slain among them

This account only covers a few chapters and so it often gets far less attention. But it’s important to note that they too made a covenant with God and that the authors of the record had “no reason to doubt but what [those acting in non-violence] were saved”. God accepted their covenant here too. Notably, Mormon felt it appropriate to include their story and account it as a righteous approach as he interjects his opinion into the record here:

There are important questions that this brings up. What are modern Mormon narratives around the people of Ammon? Are they merely that we should tolerate such people but necessarily consider them other? Or do our narratives and faith treat such people and covenants as worthy of modeling? Can we see the strength in their non-violence? Or do we interpret it as a weakness? Do we share their abhorrence of the tools of violence? Or were they just naive but worthy of pity — people who don’t “get it” but who we’ll tolerate? And, perhaps most importantly, how do we reconcile these two covenants accepted of God?

I think the Book of Mormon is fascinating this way. On the one hand we see how it lays out example after example of how we can and should defend our “religion, freedom, peace, and family”. But it also has warnings of how that can easily be twisted to suit unrighteous ends that ultimately leads to society’s demise, which Mormon witnessed first-hand in his day. The Book of Mormon wrestles with this tension between aspiring to peace but being faced with the reality of a fallen world and I think it gives advice through examples and cautionary tales on how to navigate these muddy waters.

In that context I don’t see it providing a single answer that only one approach is the right one and the other wrong. Instead it shows how we need to aspire to peacemaking, but acknowledges that there can be cases where present realities may not allow it. However, the Ammonites stand in contrast to the path of defensive force that aspiring towards non-violence is ultimately rewarded in the end, even at great sacrifice. It’s one possible response to our fallen state which God also acknowledges. Rather than pit warriors and pacifists against each other, the Book of Mormon shows how both can and should respect one another’s freedom to choose different righteous paths as God accepts them both.

Modern Mormon scripture expounds on the moral limits of choosing defensive participation in war (see Doctrine and Covenants 98). It lays out the requirements to forgive our enemies repeatedly for trespasses before we can be justified in defensive force — yet still leaves the door open to continued non-violence. But regardless, Christ taught that it is the meek who will inherit the earth (Matthew 5:5). I find that both an approach of non-violence as well as an approach that stands up in defense after repeated attempts of forbearance fit the attributes of what it might mean to be meek. The Book of Mormon points out how there’s more than one response accepted by God. And if God accepts different responses here, then perhaps we too should respect different righteous approaches of those seeking to make covenants of peace with God.